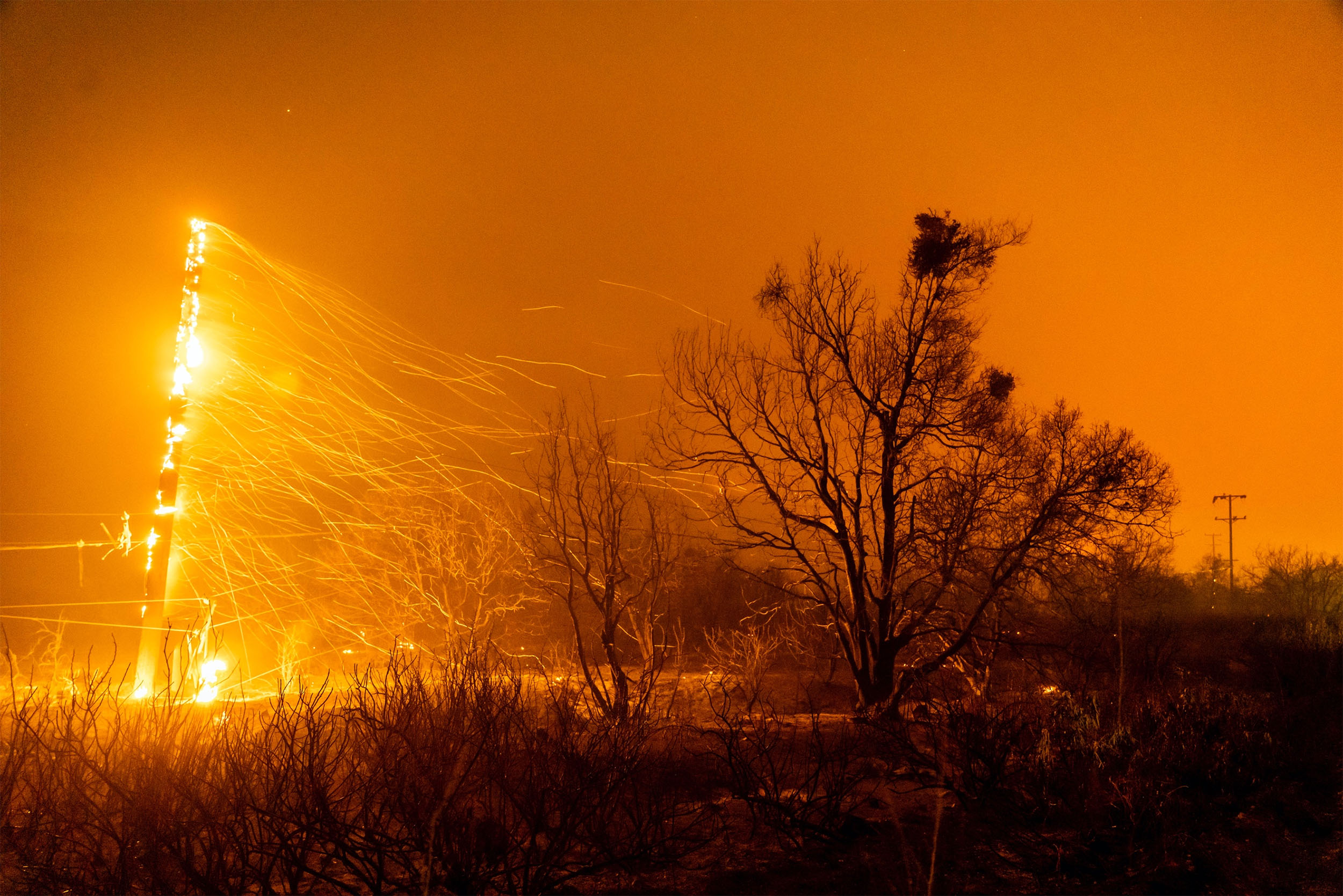 The Washington Post· by David King and Rick Parnell

While the coronavirus crisis rages, the climate worsens. This summer we’ve had rampant wildfires and rolling blackouts in California; unprecedented heat, melting and fires in the Arctic; 130-degree scorchers in Death Valley; 90-degree ocean temperatures in the Gulf of Mexico; and a record hurricane season forecast for the Atlantic. How can we possibly counter such daunting, global problems while we’re struggling to surmount a pandemic and return our lives to normal?

As it happens, we could make a very real difference against climate change for less than we’ve already spent to fight the coronavirus.

When the pandemic broke out, governments rushed to enact multitrillion-dollar aid packages that sometimes cost more than 20 percent of their gross domestic product (over 25 percent in the United States). Washington has debated spending another $1 trillion on pandemic relief and emergency stimulus, on top of the $2.2 trillion Cares Act and $4 trillion in federal loan guarantees for businesses. That is, for the most part, money well spent. The pandemic is a massive, deadly threat. But of course, so is the climate crisis.

According to a World Health Organization analysis, “Climate change is expected to cause approximately 250,000 additional deaths per year” between 2030 and 2050. That estimate may be on the low side: Another study found that climate-change-related food shortages alone could account for an additional 529,000 deaths per year by 2050. Projecting further still is difficult, but if emissions continue unabated at their current high rates, those numbers will surely rise to the point where climate change might kill more people annually than covid-19 currently does before the century’s end. But where covid deaths will decline as humans acquire immunity, deaths from climate-change- related causes will accelerate every year.

Contrasting climate and the coronavirus is something of a false dichotomy, because the two can compound each other. During the early days of pandemic-related lockdowns, daily greenhouse gas emissions dropped by 17 percent, but they soon rebounded. Air quality problems connected to climate change may make covid-19 more dangerous, and the risk of coronavirus transmission makes responses to climate emergencies, like moving and sheltering evacuees, more complicated. These difficulties will worsen as climate change alters the way humans interact with other species and one another, increasing the risk of future pandemics just as rising seas displace 150 million people who live along coastlines by mid-century.

But in another way, the pandemic ought to make fighting climate change easier, serving as a kind of model for responding to the climate crisis. While it did so at a huge cost to the economy, it has proved that large swaths of the population could change their behavior and lower the trajectory of emissions — not over decades but in a matter of weeks. It demonstrates daily that saving lives requires respect for science and objective facts. It has made clear that the scenario we’re living through is not business as usual and that we need new, bigger thinking to navigate it.

The pandemic has also raised the bar for credible crisis response. Our climate goals have been mostly limited to mitigation and adaptation: incrementally ameliorating climate change where we can and learning how to live with it where we can’t. Our coronavirus response has included mitigation (flattening the curve) and adaptation (social distancing), but these strategies aren’t ends in themselves. They’re designed to limit the virus’s impact while we look for ways to eliminate it and restore public health (vaccines and treatments).

It’s the same with climate change. Mitigation and adaptation are necessary but insufficient to restore climate health. Renewables are growing fast, and in most parts of the world they are cheaper to install than fossil-fuel power production. With sustained effort, they should be able to meet energy demand and help us fulfill the widely held goal of reducing greenhouse gas emissions by 80 percent by 2050. That would be significant mitigation and damage control. But it would not restore a livable climate.

The preindustrial atmospheric CO2 level was about 270 parts per million. We’re already at 415 ppm, or about 500 ppm if other greenhouse gases like methane are counted. On top of this, we continue to emit about 40 gigatons of greenhouse gases each year. So beyond reducing emissions and slowing carbon buildup in the atmosphere, we urgently need scalable, financeable and nondestructive strategies that can remove enough carbon to restore the atmosphere to below 350 ppm by the end of the century (ideally by 2050).

Promising interventions exist, and they will cost an order of magnitude less to deploy and scale up than what we’re spending now to fight the pandemic.

For example, direct air capture (DAC) systems extract CO2 from the atmosphere chemically, much as it is done in submarines and spacecraft. The concentrated CO2 can then be used or pumped securely underground. The Canadian company Carbon Engineering is building the world’s largest DAC plant in the Permian Basin in Texas. It will be able to capture one megaton (1 million tons, or one-forty-thousandth of our global output) of CO2 annually at a cost of $94 to $230 a ton. An average tree can absorb 48 pounds of carbon per year, so it would take 1 million trees about 42 years to remove the same quantity of CO2. The Swiss company Climeworks has developed a scalable, low-power DAC device that can operate anywhere. In Iceland, Climeworks has partnered with the CarbFix2 project to pump CO2 from the DAC underground, where it binds the gas to mineral deposits, forming carbonate rock such as limestone.

It’s feasible to scale up this mineralization process globally to sequester 50 gigatons of atmospheric carbon a year, though for now, it would be expensive — about $5 trillion annually, assuming Climeworks meets its goal of reducing costs to $100 per ton. But if the CO2 is mineralized in a factory rather than underground, those economics improve markedly, because the rock can be sold for commercial use and just about pay for itself. This would involve combining low concentrations of CO2 with calcium to produce calcium carbonate, or limestone. Manufactured limestone can be substituted for quarried limestone and used in carbon-negative concrete and road beds. Blue Planet and Carbon8 Systems are doing this now, using a process that mimics how shellfish form shells from calcium and CO2 dissolved in seawater.

The fastest biological process, and the one nature uses to remove CO2 before ice ages, is ocean photosynthesis in algae or seaweed, such as kelp. Giant kelp forests are carbon sinks that grow up to two feet per day. Unlike terrestrial forests, kelp forests don’t burn and re-emit their carbon. When they die, most can be sunk to the bottom, keeping their carbon out of the atmosphere for centuries to millennia.

Marine permaculture arrays (MPAs) are man-made irrigation grids for growing kelp forests, equipped with wave-powered pumps and pipes that can restore overturning circulation — the process that moves warm and cold water and nutrients around the depths and surface waters of the Atlantic — lost due to climate disruption. They can betowed out to sea, establishing new kelp forests and restoring fisheries in what are increasingly becoming ocean deserts. MPAs are relatively inexpensive to build, and the resulting kelp and fish can be sold commercially. MPA inventor Brian von Herzen estimates that the arrays can remove CO2 at a cost of about $80 per ton, while producing kelp products that could dramatically offset the production cost and boost fisheries. This makes them competitive with technological solutions. According to von Herzen, growing new kelp forests in just 1 to 2 percent of the oceans would sequester enough carbon to restore the climate, provided we do our part to reduce the carbon intensity of our civilization.

If we can spend trillions to fight the coronavirus, we can do this. Building the needed capacity over a 30-year period would require some investment, ranging from $50 billion per year for manufacturing limestone to $250 billion per year for MPAs. But that money would produce a 15 percent return, and even the high end is a small price to pay for a fully restored climate in this century.

The main hurdle isn’t financing or technology; we have enough of both. It’s expanding our thinking beyond half-measures and committing to outcomes we want. We know that restoring public health in the pandemic requires bold action and international cooperation. Restoring a healthy climate and a livable planet requires no less. But it’s within our grasp if we’re willing to reach for it.

The Washington Post · by David King and Rick Parnell