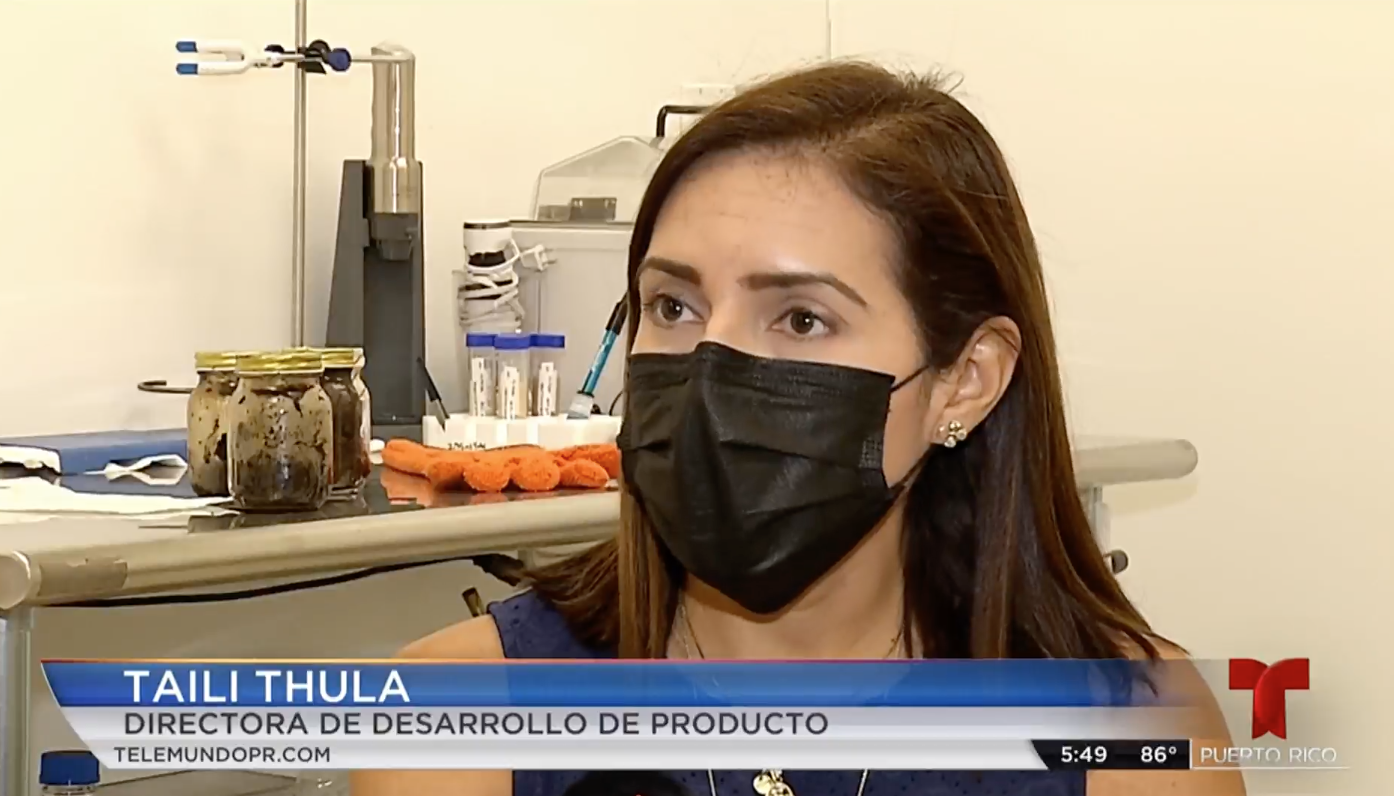 We were pleased to receive Zamira Mendoza, from Telemundo Puerto Rico's evening newscast, in our facility in Cataño, Puerto Rico.

Puerto Rico has been receiving more Sargassum in the last few years, and like Mexico, both government and communities are starting to mobilizing with more urgency. Last week, one of the power generators in the energy-hungry island had to shut down when Sargassum blocked the discharge cooling systems.

You can catch the report in Telemundo's website. The segment is in spanish, but you can read a transcript in english below.

In the last decade sargazo has become into a problem that affects us all, so much that the Electric Power Authority has pinned the blame of yesterdays's black out on this seaweed.

The many things it’s blamed for includes  effects of bad odor, damage to marine life and the negative effect on the economy and tourism.Zamira Mendoza is going to present a company located in Cataño that is looking for a solution

Over the last years, sargazo has proliferated in the Caribbean. The first significant event in PR was in 2011, andit started in the sargazo sea. It is now a bloom stretching fromto the coasts from Brazil to Africa

Because there’s so much, when it accumulates it rots in the water, leeching and toxifying the water killing marine life: it kills the corals ,and prevents turtles from reaching land to nest . For that reason, it’s very damaging.

Scientists attribute the high levels of this brown algae to the human activities that emit greenhouse gases and cause climate change.

Recently, with Climate change it's (Sargassum) become a huge problem to the Caribbean due to the excess quantities of this algae that are arriving at the coast. The company basically asked the question “hey what can we do to convert Sargassum into something positive?

With this idea, Since January 2020, the laboratories of C-Combinator are working to create alternative biodegradable alternatives and products that reduce the impact of Sargassum.

We collect the Sargassum, pass it through a press where we separate the liquids, we use the liquids for a biostimulant for agriculture.

The solid concentrate of the Sargassum is used for creams, cosmetics and we know what you’re thinking... the answer is no, no it doesn’t smell bad! It passes through processes that make into a eco-friendly  final product. They are also working on textiles, like a vegan leather with the goal of reducing the impact of this algae on our coasts.

What is more, not only are they  working with Sargassum from our coasts in Yabucoa, but they also collect in countries like Mexico because precisely in that zone of the Yucatan peninsula they’ve been facing many difficulties with Sargassum

We’re getting great results. Yes,  we areworking to improve it before it hits the market, but we are very close.

The products are free of petrochemicals, and the fertilizers and biostimulants are passed through processes that remove salts and heavy metals so that they can be used in industries such as agriculture.

Here with your news, Zamira Mendoza.

C-Combinator is proud to announce an unique collaboration agreement with Chapingo University, Mexico…